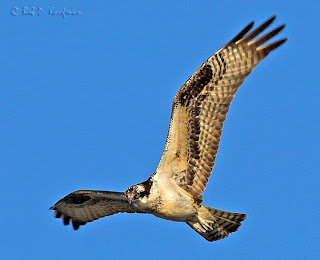 After complying with the "No Shop Day" last Friday, we did a little shopping Saturday morning. Well, my wife did. She wanted some clothes for the holidays so we went to Ross' at Foothill Blvd. in Pasadena. Best Buy was just next door, but I was able to resist the temptation of going over. Being unemployed can make a strong defense against needless buying even if the goods were at bargain prices.

But I digress. That afternoon we visited Bolsa Chica. Our target was the Reddish Egret (Egrets?). I already have photos of this lovely wader but that was when it was still a juvenile and not yet sporting the reddish feathers on its head and neck that gave it its name. So we're hoping that today we would be able to get its picture in full glory.

But first, there were pelicans near the boardwalk. Once again, these huge birds were putting on a show. They would fly a short distance then plunge head-on into the lagoon making loud splashing noises. The usual gamut of photographers were there, holding cameras ranging from the common point-and-shoot types to equipment that costs about my wife's annual salary.

Having gotten our share of pelican shots, we moved on to the "hill" where our target species were last seen. But, as luck would have it, they were not there. So we trudged through the trail leading to the tide gates without seeing anything spectacular. On our way back, we were thrilled to notice an Osprey hovering just about next to the trail. The cold wind was picking up and the raptor took advantage of the draft to "hang" in the air without so much of a wing flap. Enduring the freezing blast of cold air, we fired away. Not being successful in its fishing expedition, the Osprey eventually moved on to better hunting grounds.

When we got back to the "hill", my wife pointed to a heron-like bird in the distance.

"Is that the Reddish Egret?"

With the use of my binoculars, I confirmed that we have indeed found our quarry. But then, it was so far out in the mudflats that a decent photograph was out of the question. We did take some shots anyway for "documentary" purposes only. 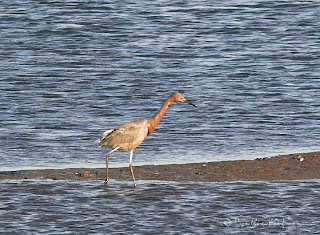 The Reddish Egret then flew even farther and as we crossed the boardwalk, the reddish sun was making its own exit.