The American Coot is as common as dirt here in southern California. Because of that local birders tend to treat it as..well, dirt. Not only are they plentiful, they are quite unassuming in their dark plumage and their call is described as "flatulent" by Ted Floyd in his Smithsonian Field Guide to Birds of North America, page 143.

Monday morning I was at the lake's edge at Santa Fe Dam in Irwindale trying to identify some gulls flying in the distance and faring badly. A few feet away several Coots were swimming close to shore. One of them gave me one of those "flatulent" calls as if to belittle my gull-identification prowess. To make it even worse, it gave me this: 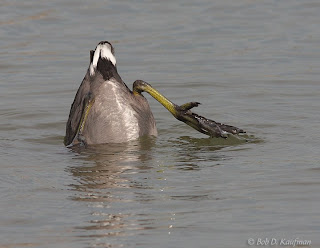 The Coots got my attention, to say the least, not because of the perceived insult, but because of this heretofore unobserved behavior. I didn't know Coots can dabble like a Pintail. Not only that, they can dive, too, like any self-respecting Scaup.

That made me realize that I have not been giving much concern to some species of birds just because they are very common and quite unattractive. Had I been more observant, like today, I would have noticed some rather interesting characteristics of these birds.

This fact was even more emphasized when I saw a Cedar Waxwing on the ground! All these times whenever I see waxwings, they are high up in the tree tops and always as a flock. This particular waxwing on this particular morning was all by itself and was on the grass peering here and there. Then I realized what it was doing. It was drinking the tiny dewdrops clinging on the grass leaves. 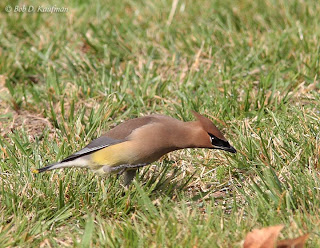 As if that wasn't enough, I got another lesson from the Western Bluebirds. As far as I know, Western Bluebirds are insect eaters. They would perch on a branch, survey the area below and then swoop at some unfortunate insect. Until this morning, that is, when I saw a bluebird pick up a berry and swallow it whole! I've seen Mountain Bluebirds do this but I thought Westerns have different feeding habits from them. 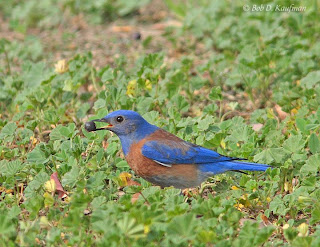 On that fateful morning in early March, Mother Nature gave me some life lessons. It made me rethink my approach in birding. It's like going back to basics. Birding, after all, is observing. Going forward it will be as if I was given a new pair of eyes. Seeing with freshness and noticing the fascinating behaviors of the feathered creatures around me.

Mother Nature always throws you a curveball when you least expect it. But you did awesome - seeing these behaviors and sharing with us. Thanks!

LOL, I see you still have plenty of movie quotes :D

That is funny how sometimes we wake up to the common ones and realize they are just as cool as the ones we don't see too often.

Great observations Bob and I couldn't agree more. I spent most of the day Saturday in a photo blind to try and capture my target bird, the Peregrine Falcon. What did I see?

Brewer's Blackbirds, Tree Swallows and hundreds of American Coots! I, like you, found much to be impressed about the "common coot."

Isn't it strange how we need to "see" our common birds in a new light to appreciate their beauty?

Thanks for re-emphasizing what we all should be aware of, appreciating our "common birds" that others may only wish they could see in person.

Thanks for sharing your great captures of all your observations!