The Hills are alive...

One nice thing about Pasadena is that it is close to a variety of avian habitats – well if you consider an hour’s drive close. Anyway with the onset of spring, we thought it would be nice to head for the hills. Nestled amidst the San Gabriel Mountains about 30 miles east of us is Placerita Canyon. Not a lot of people go there, as it lies sort of off the beaten track. And that could be a good thing.

Of course, little did we know that there was a school outing there yesterday. Thankfully, they stayed at the ampitheater and we were able to explore the trails undisturbed. The highlight of our day came when we were at the picnic grounds where there were always a variety of birds to be seen. Dark-eyed Juncos were just about everywhere and the Western Bluebirds were constantly swooping down on some insect. I was taking some pictures of the Juncos when my wife almost nonchalantly said, “Look, a sparrow!”

Sparrows weren’t really that unusual here, White-crowneds and an ocassional Golden-crown were regulars. But when I looked at the object of my wife’s comment, I was speechless for quite a while. Cynthia, after a few minutes of waiting for me to identify the sparrow, finally asked, “Well, are you going to tell me what kind it is?”

White-throateds are very rare in California and to serendipitiously find one here can make one lose one’s speech faculties. 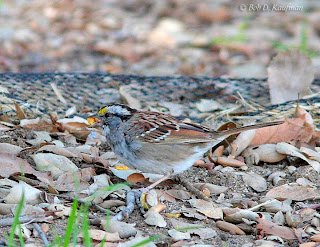 Per suggestion of the local docent, we proceeded to the Walker Ranch area where not far from the parking area, a hillside of yellow flowers were in full bloom. Here we saw our FOS Hooded Oriole. 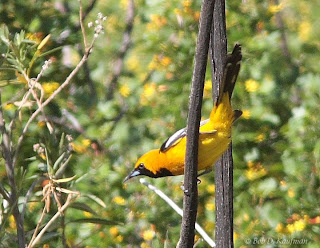 Rufous Hummingbirds were competing with the Anna’s for prime feeding territory. 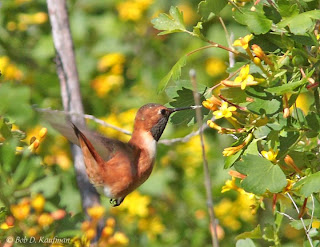 We saw a lot of birds that lovely Friday morning and it even seemed like the canyon was bursting in song. Even to this slightly hearing-impaired birder.

REALLY like that Rufous Hummingbird shot! They are pretty rare here and such a beautiful bird!