Last Independence Day Cynthia and I did some walkin' at San Joaquin (did you get that?) Wildlife Sanctuary in Irvine. It was the usual summer doldrums with only a few species to see. The birds were so sparse that fellow birder/blogger Felicia Lee recommended to take "Avocets" to relieve such avian ennui. Sure enough the Avocets and their young at Pond D and E were always a sight to see.

Actually we were hoping to catch a glimpse of the Black Tern that was seen here just recently. Unfortunately only Forster's (and only a couple of them) were foraging the deeper ponds. After some walking (here we go again..) around Pond 2 and the temperature slowly climbing to almost unbearable heights, we were startled by a loud chattering. My wife patiently stalked the source of that sound unsure of what bird is creating such a racket. Finally, she was able to get a photo of what she termed as a "loud brown bird". When she showed the image to me, I realized right away that it was a Yellow-breasted Chat. Of course! With that kind of noise-making, it had to be a Chat! For the next half-hour or so, it played hide-and-seek with us - always uttering it's raucous call while remaining out of sight, hidden among the dense thicket around us. For a few moments it would emerge from hiding, perhaps trying to find out if we have given up the chase, and then would promptly disappear again, still continuing it's taunting vocalizations. It was during one of the Chat's attempts to satisfy it's curiosity that I was able to fire off a few shots at last. Eventually, the heat being a great factor, we got tired of the game and left the loud brown bird to it's own antics. 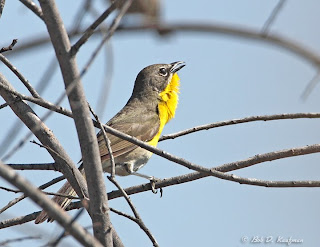 We were at the parking lot getting ready to leave when we were engaged in conversation by Bob who is a regular visitor at San Joaquin (he comes every Saturday for the past 20 years he said - now that is some walking!). A few minutes later, Jim Rowe came along. We have met Jim several times before and he was the "angel" that showed us the Yellow-bellied Sapsucker at Santiago Oaks early this year. He joined our conversation and related how surprised he was to find a Redhead (a kind of duck - not a Lucille Ball lookalike). Cynthia and I simultaneously exclaimed, "A Redhead? Where?" When he said it was at Pond C, we hastily bade them "adios amigos" and half-ran to the pond referred to.

And there it was in full redheaded glory, standing out from among the Ruddy Ducks and Cinnamon Teals, shining in the noonday sun. 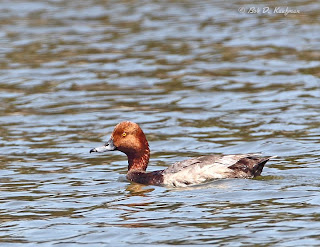 A very nice day of birding. The yellow throat and front of that chat is beautiful.

I love your birding expeditions. Nice captures as well.

A good day's birding, indeed. Thanks for sharing your photos and your walking stories with us.

Great capture of the Yellow-breasted Chat Bob! They are always easy to hear and difficult to see, are they not? It seems like they can be right in front of you but you can't see them. Excellent shot of the bird singing. Sounds like you had a good day after all, plus you got all that exercise!