A Walk in the Crowds

I am perhaps the Silas Marner of birders. I mean I watch my wallet in the same unwavering passion as I do in watching birds. And so when I discovered that the Los Angeles Arboretum will not be charging any entrance fees on the third Tuesday of the month, I was ecstatic! A whopping $5 savings right there!

I was one of the first in line at the gates when they opened at 9 am. As I meandered along enjoying the butterflies flitting among the lovely flowers, I saw a Red-whiskered Bulbul. This exotic bird was one of the main reasons I visit the Arboretum. They are quite common and have been known to breed here. This one however was perched far too high in the treetop for a good photograph. Confident that I would have more encounters with it as the day progressed, I moved on to observe the other avian denizens of the park. Which wasn't much, sad to say. Summer birding doldrums is still in full effect as temperatures were already in the high 90's at ten in the morning.

Then came the crowds. It turns out that I wasn't alone in availing of a "freebie". Families of  varying sizes were everywhere. With them came children. Loud, noisy, exuberant children. Now don't get me wrong - I have nothing against kids, I have 4 grandchildren of my own - but when you are intent on trying to photograph a bird, it is not a good idea to be surrounded by a shrieking throng of young ones.

My hopes at ever seeing my favorite bulbul were fading fast with each minute that passed by. In almost abject resignation, I just contented myself at photographing the various flowers in the Arboretum. One of the places where there is a proliferation of some colorful blooms were at the top of the man-made watefalls. It was while I was taking a breather after negotiating the steep stairs that led to my destination that I heard a rustle and warble close to me. A Red-whiskered Bulbul was peeping through the leaves calling "kink-a-jou". I quickly aimed my telephoto lens and fired off a quick shot, knowing fully well that it will be just one of those "documentary" photos. Then as if obeying a divine command, the bird flew to an open branch just close enough to be at my lens' minimum focusing distance. It gave me a curious look, hopped to another branch, gave me another look and then flew away. 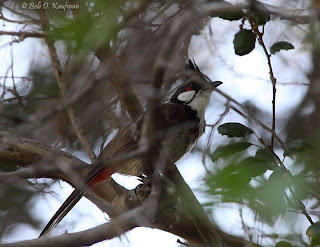 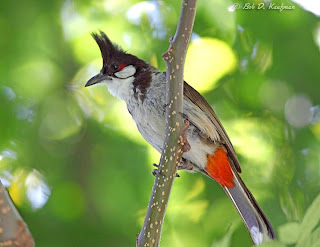 After that encounter, I was happy to be walking with the crowd of people out to enjoy a glorious summer day. If it were not for fear of being thought that I had gone off of my rockers, I'd be skipping and yelling among the children in a celebration of joy.

Oh, what a total Beauty!!!
Lovely, lovely shots!
(And it's ok when I envy you a bit for your 500mm, no? ;) )
Yepp, sometimes it seems the birds do you a favor to save your day, no?
It usually happens when I get down that I see something totally awesome out there :)

Thanks, Nicole. Minor correction..I just remembered I wasn't using my 500mm lens at that time, it was a 300mm with a 1.4 extender. I already corrected my blog.

That is such a beautiful bird!!
I'm glad you managed to find it, even with the noise, and the kids and the crowds.

Thanks, Mel. Actually it was the Bulbul that found me. :-)

Lovely bird and how nice that you were able to get some good photos. I like to do my birding by myself! No noise! and no distractions!!

What a lovely bird!! Fantastic shots!!!

Awesome Bob! Don't you love it when the bird in question decides it's going to see what you are doing and comes right out to greet you?

You take as many shots as you can muster, as quickly as you can 'cause you never know when the bird will decide that you've gotten enough.

That last capture is my favorite of the series. Great pose and beautiful colors. That would also be a lifer for me! Thanks for sharing.