Ever since my discombobulated affair with the Solitary Sandpiper last year, it has become my nemesis bird. For me and my wife, it has become the bird "that wasn't there". So when Pasadena Audubon announced that they will be having a bird walk on Saturday, Aug. 15th at the Los Angeles River where, guess what? - Solitary Sandpipers have been seen quite regularly lately, we made it a point to be there.

And there we were 10 minutes before the appointed time. We met Barbara Johnson who was there even earlier and informed us that she saw our target bird, oh, maybe 5, 10 minutes ago. As soon as the birding party was complete we proceeded to the bike trail that overlooks the river. Below us were a number of birds, Stilts, Avocets, Mallards, both species of Dowitchers, Least Sandpipers, Western Sandpipers, but no Solitary. Mike San Miguel, our leader, patiently scanned each and every individual bird at the river below hoping that he would be able to deliver our sought-after species.

"Well", he said with a sigh, "no Solitary Sandpipers but there is a single Red Knot out there beyond the group of Terns."

Red Knot?! This is another species that had also eluded us for quite some time.

For this trip, I purposely did not bring my big lens knowing we would be doing a lot of walking and of course, I wouldn't want to burden these ancient body of mine with such a heavy load. Excited at seeing a lifer, I wanted to get at least a "documentary" shot of the Red Knot. And that was exactly all I got. A "documentary" shot. The bird was just too tiny and too far even for my 400mm lens. 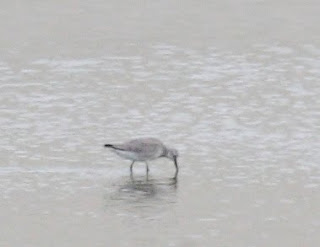 We visited two more spots along the L.A. River and it was pretty much more of the same. Meaning still no Solitary Sandpipers!!!

For us it is now a challenge. This is our last year of birding America and by golly, we will add that bird to our list or die trying. Well, not really, but it feels good just to say that.

For additional (and more successful?) blogs and photos about birds, please visit:

Ah! But!! the record shots have such great memories attached to them, I find!

LOL on the nemesis bird..You did get quite a variety while you were out. I am new and mostly a backyard birder, but I can see how it would get to be frustrating at not being able to see what you wish to see most...but the red knot was a gift.. Michelle

Beautiful shot of the bird.

No worries Bob. I am sure you will see a Solitary Sandpiper sometime and then you will have to find another nemesis bird ;-)

Look at the bright side, you got the Red Knot!

I'm rather curious to know where you two will be off to after birding America.

@Gwen, We will be retiring to our native land, the Philippines.

I'm sure the day was not wasted even though youdid not get what you went for, you got a pretty good replacement.