A Tern of Fortune

Our birding woes continued to haunt us. Having failed at finding the Solitary Sandpiper last August 15th, two more species of its family made our lives a bit miserable lately. On both occasions we had those “maybe we did, maybe we didn’t” situations. Allow me to elaborate:

Last Saturday my wife and I went to the Los Angeles River to look for Baird’s Sandpipers. There were hundreds of peeps gathered in the distance about of perhaps more than a hundred feet away. To pick out a few paler, longer winged individuals from that group was downright frustrating, especially when the flock would suddenly take off, circle a bit, and land just a few feet where they used to be. We thought we saw a couple of pale birds from the constantly moving throng but without a photograph (did I mention they were too far?) to support our hunch or an expert opinion to confirm the identities of the birds we saw (where are the uberbirders when you need them?), we decided not to include the Baird’s on our list.

I visited San Joaquin Wildlife Sanctuary in Irvine last Monday. Cynthia has to go to work so I went solo. This time my quarry was a Semipalmated Sandpiper. As Yogi Berra once said, “it’s déjà vu all over again”. There were tons of Westerns and Leasts frolicking at the ponds and to pick out one with a shorter bill among them was an exercise in futility. Even with the arrival of locals Jim and Lucy (with her spotting scope) didn’t do any good. I took some pictures of what I suspected to be the Semipalmated, but the expert who I sent them to couldn’t be 100% sure either.

Earlier in the morning, just to shake off the misery of failing to find the Semiplamated, I wandered off to the other ponds, hoping that my target bird would be there (and easier to spot). While I was scanning the waters at Pond C, a tern kept circling and made various attempts at catching some prey. I didn’t pay much attention to it, as terns are not that unusual here. But then in one of its turns, I noticed that the wings were dark grayish unlike the Forster’s that frequent this place. Now this time I had with me my big 500mm lens mounted on a tripod. This set-up is excellent for birds that stay put. But try it on a fast flying whitish bird and it becomes the epitome of inefficiency. That said, I was able to get a “hail mary” shot – good enough to confirm (thanks to Lucy’s help) that what I saw was a juvenile Black Tern! I think it is safe to say that the Black Tern is as uncommon as a Semipalmated Sandpiper hereabouts. At least my day wasn’t a total loss. 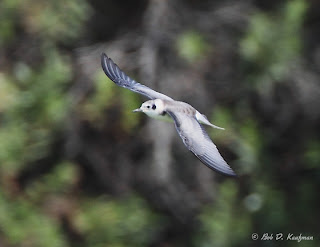 For other (more successful?) birding blogs and photographs, please visit:

Wow, I can understand your frustration!
That happens a lot to us, new- inexpert birder 'wanna-be's... We often see a new bird, it IS a new bird to us for sure, but ID with no picture, with the amount of birds you can find in this country is just frustrating!!
So, we often end up with no additions to our list :(

Sorry about the 'ones that got away' but it was great to get a photo of a Black Tern. We get numbers of White-winged Black Terns out here but the Black Tern is listed as a very rare vagrant'

Hey Bob, I have noticed that whenever you don't see your target bird, you often see some other fantastic "catch" that makes up for it or sometimes, is even a better sighting! It's kinda hard to feel sorry for a lucky guy like you buddy ;-)

All kidding aside, it always feels good when you get to see a new or rare bird doesn't it. Persistence, it seems, always pays off!

That's the highs and lows of birding! It took 3 trips to Borneo before we got Bornean Bristlehead, but again missed out on Whitehead's Trogon. Our friend who came with us for the first time saw both. Not fair!

You win some and you lose some...

Yes indeed, a great photo of the Tern!