Having learned our lesson from our debacle on our last trip to the Los Angeles River - seeing hundreds of "peeps" and ill-equipped to pick out the Baird's Sandpiper, this time we brought along a kid. Not just any kid, though. John Garrett is a young (not yet 16) birder with more than 600 species in his lifelist. He is an expert at looking at those mind-boggling subtle differences that separate say, a Semipalmated Sandpiper, from among a continuously moving flock of Western Sandpipers feeding a hundred yards away.

Five minutes after he set up his spotting scope, and way before I was even able to plunk down mine, he said, "Bob, there's two Baird's Sandpipers in that group over there". Cynthia and I quickly peered through his scope and lo and behold, we got our lifer! Now comes the "documentation" part. The birds were just too far away for a decent photograph. I gave it a couple of shots and hoped that it would be sufficient. We then spent another couple of hours scouring the river and hoping to find an even rarer sandpiper - the Buff-breasted - which was seen two days ago. Dipped on that.

On the way home, I thought that we might try to visit the Rio Hondo in El Monte and see if we can find any interesting birds there. Interestingly, there were four (!!!) Baird's Sandpipers there and this time John volunteered to climb down the concrete levee and take a picture of the Baird's for me. 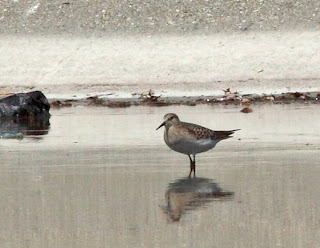 That definitely made my day. A gazillion thanks to John, who even decided to forego chasing the Great Knot in San Diego just because he made a promise to help us find the Bairds. And oh, he even identified the mystery sandpiper I saw at San Joaquin last Monday as a Semipalmated - thereby adding another lifer to my list.

How nice to have such a helpful young birder with you. We don't get the sandpipers out here that you mentioned but we do get lots of Great Knots - if you want to come over and look in my patch of water!!!

Great to be able to have that kind of help congratulations on the two new lifers.

What is it about young birders that makes them so good? You would think our years of experience and wisdom would trump them, but it doesn't work that way. Baird's is always a challenge - glad you got it.

That is some accomplished teenager.! I am happy that you both got your lifers. That is always a good feeling.. --Michelle--

Congrats on the lifers Bob! Your buddy John is a very nice young fellow to have around it seems!

Not only a dazzling birder, but quite a good photographer too. Well done on you John Garret.

Thanks for sharing Bob, great read as usual :)

Younger folks can always teach us a thing or two. This young fella has an impressive life list!

Nice photo of the Baird's!

Great story. I hope I can get my grandson into birding when he is old enough. He points at flying birds now.