The juvie was up to no good. He had been keeping his prospect's abode under surveillance, trying to determine if the occupant was still there. Slowly, he circled the place, checking every nook and cranny in the vicinity. Gaining courage, he peeped into the opening. Not getting any response, he tucked his head in. 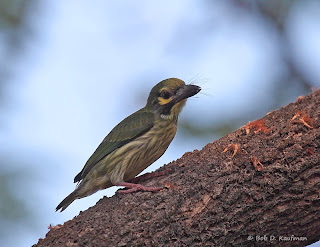 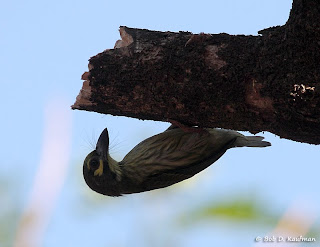 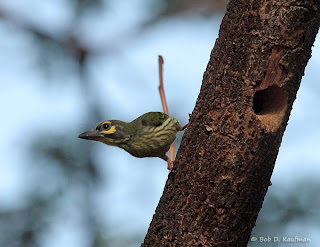 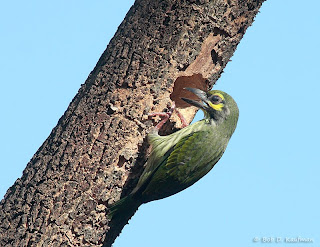 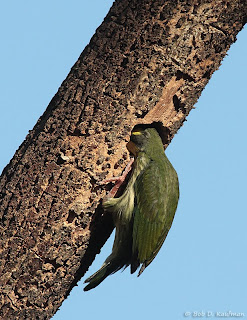 Only to meet the raging charge of the resident. 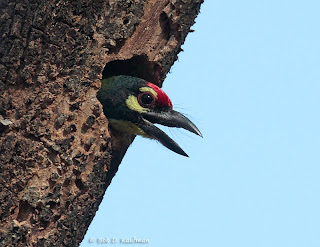 Alarmed, the juvie quickly took flight, the irate adult nipping at his tail.

Satisfied that the intruder had gone for good, the father, proud at having protected his brood, stood majestically at the top of his home and proclaimed his victory by a loud "pok" "pok" "pok". 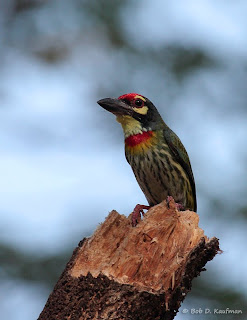 The Coppersmith Barbet then quietly entered his hole in the branch to resume his nesting activities. 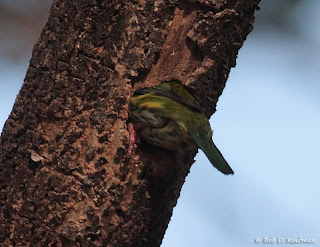 For other (less hostile?) birding blogs and photographs please visit:

Wow! Quite a war, I like how you documented it with the pics.
Hugs from Peru,
Mel

Wow, what a cool sight to watch. Wonderful series of photos, Bob. They are both neat looking birds.

That's a great series of photos. I particularly like the one with the very colorful head looking out the hole.

...you were in the right place at the right time. I really interesting series of photos. Lucky!!

Great series of the Coppersmith Barbet Bob! I love the shot of the victor standing on the broken branch.

Does the male of this species incubate the eggs or just feed the chicks after they're hatched?

Thanks Mel, Eileen, Mick, kelly and Larry.
@Larry, the male and the female take turns in incubating the eggs.

How lucky of you to catch that great series!
And great the Dad could protect his Brood :)

Wonderful series of photos, and what an avian soap opera!