Armed with excellent directions provided by fellow PBPer (Philippine Bird Photography group)Mark Itol, Cynthia and I woke up at 4;30 am and drove south to the campus of the University of the Philippines in Los Banos (UPLB). The campus is located at Mt. Makiling so we expected to see some mountain forest birds.

We were at the vicinity of the TREES Hostel a little after six. As I was unpacking our gear, we saw a birder about 50 meters up the dirt road. Hoping he would be another member of the PBP or of the Wildbird Club of the Philippines (WBCP), we were somewhat surprised to see a Caucasian birding by himself. We introduced ourselves and discovered that he is Gerry Brice (not sure if this is how it is spelled because he pronounced it in his thick Scottish accent). He said he just arrived at Makiling direct from his flight from London and hasn't even slept yet. As we were talking we heard the call of a bird and looking up, we were thrilled to see a Balicassiao (Dicrurus balicassius) a member of the Drongo family and a Philippine endemic. Gerry was so happy and thankful that he got his first endemic even as he struggled to pronounce the name(It sounded like Valley Cashew). What made the sighting even more exciting was that our Balicassiao flew across the road and settled in its nest! 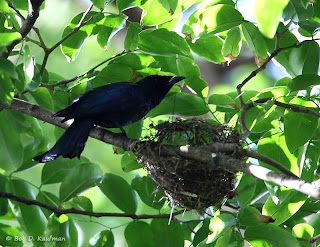 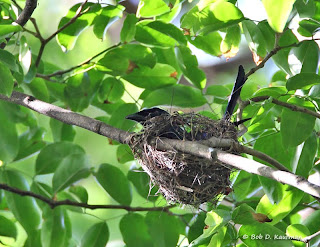 We three then strolled back to the hostel compound where a pair of Olive-backed Sunbirds cavorted before our eyes. 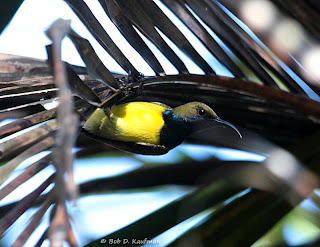 Gerry then begged off as he can no longer control his sleepiness (he stays at the hostel) and wanted to go to bed. We bade him goodbye and as we turned around we saw a Besra (Accipiter virgatus) fly over. 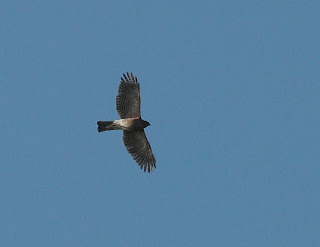 Bird activity died down at the hostel compound so we decided to check out the grove of tall trees between the Museum and the Botanic Garden (which was closed to the public because they were doing some construction there). Bird song was everywhere but they were coming from the canopies some 50 feet up. Occasionally we would see movement but frustratingly difficult to determine what kind of birds they were. Cynthia wandered off trying to pinpoint the source of a whistling sound that is coming from low (!) bushes near the entrance of the Botanic Garden. I remained in the middle of the grove still determined to find out what birds are hiding up there. When I glanced at Cynthia I noticed that she stalking something aided by an enthusiastic group of construction workers. I quickly hauled by gear and ran to the clump of low trees where the workers were almost jumping up and down as they pointed to a grayish-brown thing in the trees. It didn't take long for me to spot a hawk-sized bird with bright yellow eye-rings. I fired away as the bird flew from branch to branch. My wife, on the other hand, was still trying to locate the same bird. It was when it flew towards her that she realized we got a Philippine Hawk-Cuckoo, a bird that eluded us at both U.P. Diliman and Loyola Grand Villas (and today's lifer number 3). 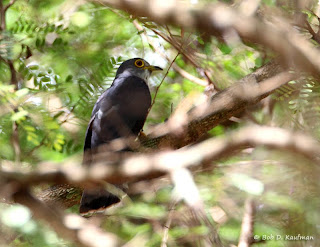 The hawk-cuckoo eventually flew off and out of sight and we returned to the grove of tall trees. This time I saw a tiny flash of red that zoomed from vine to vine. I knew it was some sort of a sunbird but just couldn't tell which species it was. At home and after looking at the fuzzy pictures that I managed to get, I was finally able to identify it as Purple-throated Sunbird (Leptocoma sperata) - our 4th, and final, lifer for the day.

Wow! Sounds like an exciting trip. Perfect timing catching the Balicassiao returning to its nest (new bird for me. I had to go back and reread the name, I did, however, remember "Valley Cashew!"

A very nice lot of new birds for one day! The sunbird is especially beautiful.

Great to get so many new birds in a row.

I guess you have been majorly lucky again. What a beautiful collection!
I totally love that sunbird :)

Sounds like you had a great bird outing, Bob! Congrats on your sightings and I love the photos. The Hawk Cuckoo looks like a cool bird.

awesome birding! and photos, i love third one down - what a cool composition with the bird. Sounds like a very productive day, great stuff!

Very cool, Bob. I'd be ecstatic to see even one of those birds. THe Balicassiao is beautiful - the dark blue reminds me of the color of grackles in the sunlight. And the eyering on the cuckoo - great shot.

Great captures Bob and congrats on the lifers! I always get excited when I get to observe a bird in the nest. Good birding!