The Colors of Candaba

In the beginning it was black.


We learned from the members of the Wild Bird Club of the Philippines (WBCP) who were here last week about them. There's plenty of them in Candaba these days, we gathered from their reports. When we saw one fly over, our hopes were buoyed. It wasn't long after we have assembled our gears, that Olan,  a fellow birdnut (a term we use to describe members of the Philippine Bird Photography group) started yelling and was enthusiastically pointing at a thick tangle of bushes. We (Alain, Bong, Mark, Rey, my wife and myself) all rushed to where Olan was standing and tried very hard to locate the object of his excitement. I can already hear the clicking shutters of my friends cameras and I was still squinting, looking at every leaf, every branch, every bough and getting frustrated at not finding the reason for all this commotion. Until finally with the help of Cynthia, I saw it! A Black Bittern! A lifer for all of us! It was huge, bigger than any Philippine bittern I have seen and it was indeed black, a contrast to the green everything around it. 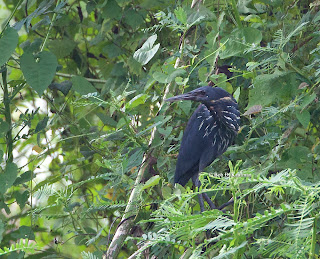 
Tall and thick vegetation now cover most of what used to be a huge pond where we saw the Bean Goose last April. Much to the delight of the local waders. Black-crowned Night Herons established a nesting colony and some of them were enjoying an early morning flight. Then of course, there were the bitterns. Normally skulkers and seldom seen in broad daylight, we were pleasantly surprised to find them out in the open. Unlike the uncommon Black Bittern, Yellow bitterns are quite plentiful, some of them even inhabiting semi-urban areas. One of these secretive birds was so intrigued by my wife's imitation of its call that it stretched out its neck in rapt curiosity. That was the first time I've seen a Yellow Bittern do that. 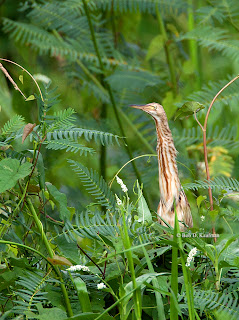 A flash of white.


Rey was driving my car while Cynthia and I were riding "shotgun" as it were when we saw a flash of white fly up to a "camachile" tree. Rey slowed down and quietly stopped as I trained my binoculars to the dark area beneath the canopy of the said tree. Turtle Doves were staring down at me and I'm thinking, no, these can't be the birds that we just saw. Some movement past the doves caught my attention, brownish birds with white breasts and bellies. I described them to Rey and his eyes widened. White-shouldered Starlings! he said almost in disbelief. As soon as we aimed our cameras at these avian wonders they flew. We could not find them again.


A touch of purple.


There was a pond where the heads of heron stuck out from the surrounding brownish stalks of reed. Once in a while one these huge birds would take to the air, its enormous wings flapping slowly. Purple Herons convey a certain degree of royalty not only with their color, but also when they stare with seeming arrogance. They are magnificently tall creatures with their back covered in a purplish cloak. Somehow I picture them in my mind holding a scepter ruling over the ponds of Candaba. 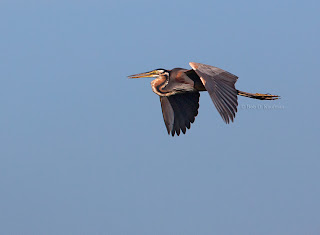 There weren't that many birds in Candaba that morning, in terms of variety. As for us, we were quite happy. It was bittern than nothing.


For other (even more colorful?) blogs and photographs, please visit:

...great photos, and how wonderful that the Yellow Bittern responded to your wife's call. That would have made my day!

The birds and habitat you describe are so interesting. I especially like the photo of the Yellow Bittern with its neck extended.

Its always so much fun to see a bird species for the first time. I love bitterns. They ARE skulky which is what makes them so much fun when you do see them. Love the yellow one, too, stretching up to see whose calling! Nice image.

Great post Bob. That Black Bittern is exquisite! Wow would I love to see one of those!

The Yellow Bittern is cool too. It reminds me a lot of our American Bittern. And the Purple Heron, beautiful.

I was happy to see the Yellow Bittern in that pose. I have a similar but not that good. :) You are lucky to have birds. Where I live the country is emptied of birds now.