Despite its proximity (after all it is located in Metro Manila) we have not visited the Coastal "lagoon" in Paranaque. So when friends Tina, Tonji, Sylvia and Ixi told us that they were planning to go there on the morning of Oct. 6th, we asked to be counted in.

When our convoy of four SUVs passed through the gates that Wednesday morning, Cynthia and I had a lot of expectations. Migration was in full swing and we were hoping that we would get closer looks at the species we've seen at the Macabebe/Masantol area (see my previous blog titled It's a mud, mud world).

The "lagoon" is actually a reclaimed piece of land that had been left on its own. Over the years vegetation had grown over it and this in turn attracted birds. The shoreline is a bit rocky and covered with...garbage!! It seemed like all the detritus thrown at Manila Bay ended here. Surprisingly, shorebirds and waders inhabit this place.

But not apparently on the very day we were there.  The usual suspects were there, of course, like the dozens of Little Egrets standing amidst the rubbish. Grey-tailed Tattlers and Common Sandpipers would occasionally drop by among the rocks by the water's edge. The only Whimbrel that showed up was so skittish we barely had gotten good looks at it. Chestnut Munias, Brown Shrikes, Zebra Doves and Spotted Doves were all doing their own businesses among the shrubbery. Despite all the trash washed up on the shore, the evidence of fish life was made obvious by the presence of Collared Kingfishers (the most number I've seen in one place) and Whiskered Terns. It must have a convention day for terns because they are just everywhere! Many of them diving for fish just a few feet from the water's edge.
The hoped for migrant species of plovers and sandpipers were heart-breakingly absent. And so we just contented ourselves at practicing our BIF (birds-in-flight) shots. Those swift-flying terns definitely provided the challenge we needed. Were it not for the great company of friends, this would have turned out to be a rather unexciting day.

It was when I was processing my photos at home that I noticed something different with an egret that I took a photo of. Unlike the abundant Little Egrets at the lagoon, this one had an all-yellow pair of legs and a somewhat pinkish bill. Looking closer at the photo, there was a faint bluish tinge between the eyes and the beak. Could it be that I have taken a shot of an extremely rare Chinese Egret? It appears so but I will wait for the opinion of the experts before I can claim that it was so.


Update: Experts confirmed that this is indeed a Chinese Egret, therefore a lifer for us! Yay!! 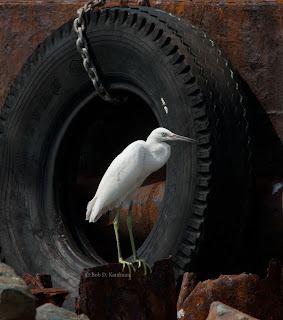 He really stands out against that tire. Nice shot!

how nice! Congratulations to the new bird. :) A goodlooking bird as all egrets.