Lately, the town of Baras in Rizal province had become a favorite place for taking pictures of birds. So Cynthia and I decided to go there for our last birding day of the year. Not long after we arrived we met a group of fellow bird photographers. Here is the group photo of the Band of Barasers: Ferdie Llanes, Chris Ferrer, Russel, Elmer Budomo, and Joel Dayao. (Photo courtesy of Atty. Tim Calumpong) 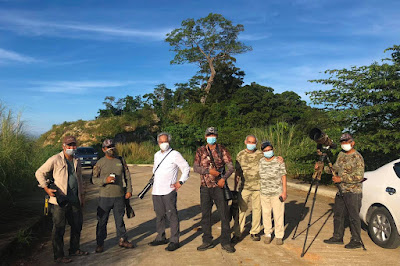 The very first species we encountered were two Turtledoves. But there wasn't a Partridge in a Pear tree. 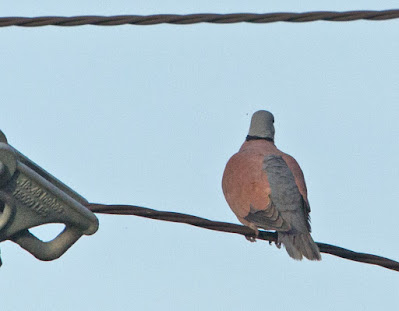 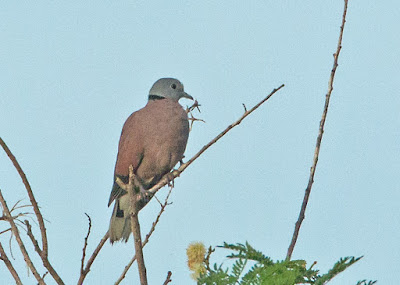 As the band of Barasers were waiting for the Philippine Cuckoo-Dove to show up, I saw a Red-keeled Flowerpecker feeding on a nearby "aratiles" tree. 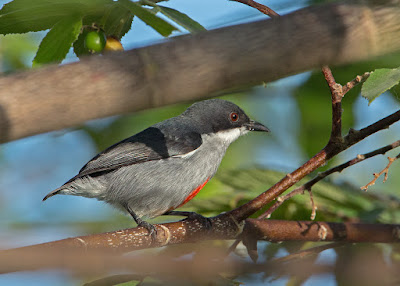 Then from behind where we were standing a Balicassiao flew to a branch a below us. 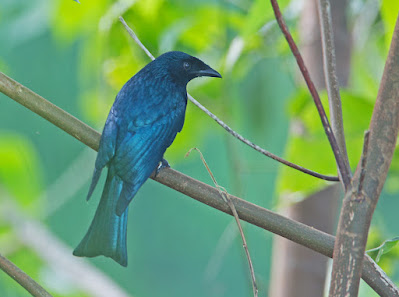 Since the Cuckoo-Dove was a no show, the group moved to the place where a Rough-crested Malkoha was seen. And sure enough, it peeped through the thick foliage. 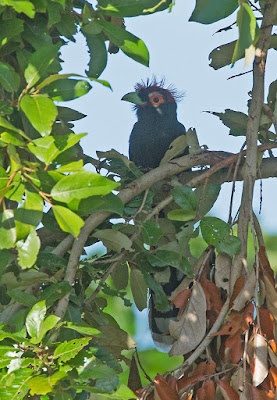 As if to congratulate us in getting shots of the Malkoha, a Coppersmith Barbet began singing its "pok pok" song. 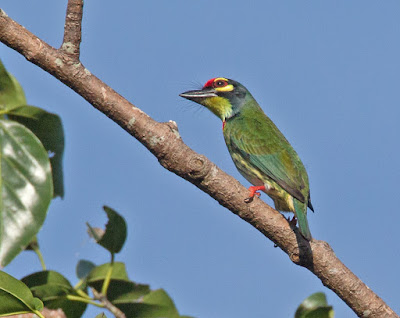 Having seen the target bird, we all agreed to proceed to the clubhouse where a flowering African Tulip tree attracts several species of birds. Along the way, we came across a White-throated Kingfisher. 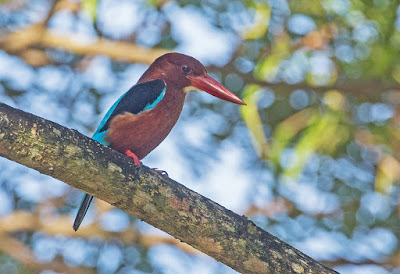 As we were about to enter the parking area, a White-eared Brown Dove was on the ground foraging for food. That was an unusual habit for this species. 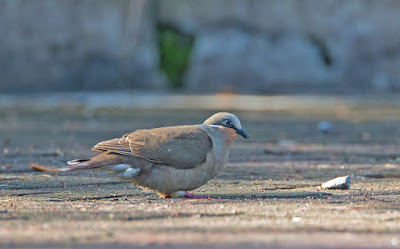 The expected Philippine Hanging Parrot was at the top of the tulip tree. 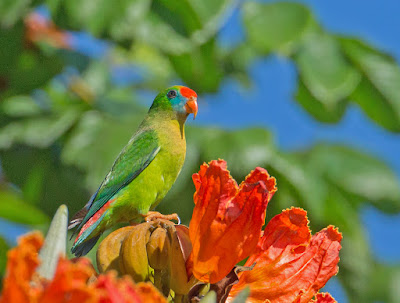 During lulls between the appearance of the male and female parrots, I took an obligatory shot at a Golden-bellied Gerygone. 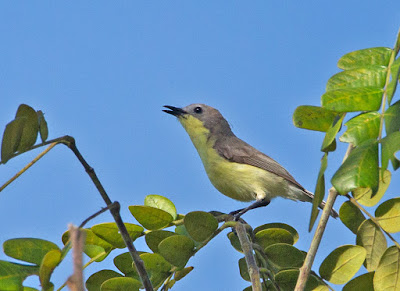 And of the Brown Shrike, of course! 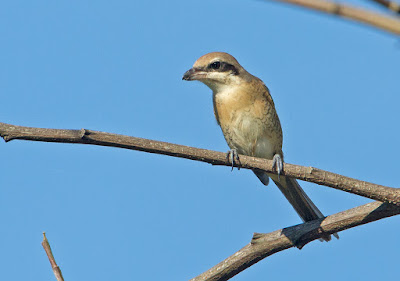 Soon another hoped for bird, the Stripe-headed Rhabdornis, came and fed on the red flowers. 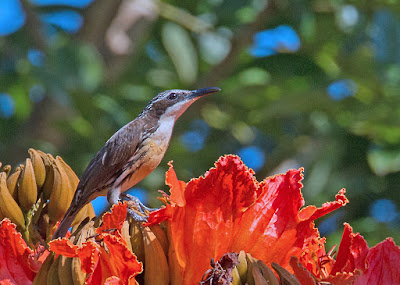 After a while, a Sunbird, which was definitely not an Olive-backed came. Ferdie thought it was a Handsome and I believed it was a Luzon. Chris Ferrer later confirmed that it was a Grey-throated! I think this was the first time that this species was seen here. 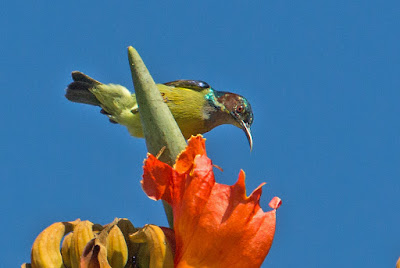 We waited for the Naked-faced Spiderhunter but it didn't show up. So we told our friends that we would roam around the area to look for other birds. We went to the "hill"  hoping to see some raptors, the cuckoo-dove and the Blue Rock Thrush. No raptors and no cuckoo dove. There was a bird high up in the tree and I took a shot at it. Later Ferdie came and told us that the Blue Rock Thrush no longer stays near the ground when there are people around and prefers to perch on the tree instead. Looking at the photo I took confirmed that it was indeed our target bird. 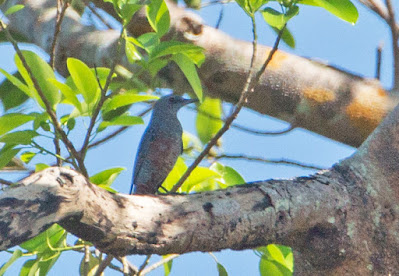 At the "subdivision" area, the Paddyfield Pipits were everywhere! 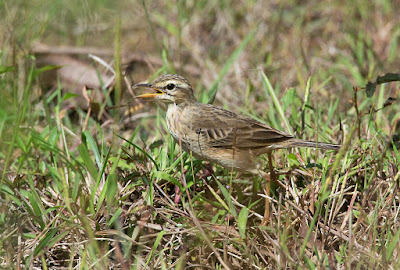 Passing by the bridge, I saw a sandpiper at the canal area. It was confirmed later by Rob Hutchinson (through the photos posted by Ferdie) that it was an uncommon Green Sandpiper! 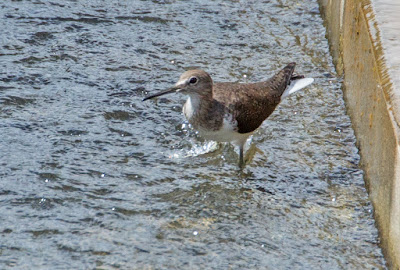 Of course, Pied Bush Chats, both male and female, were all over the place. 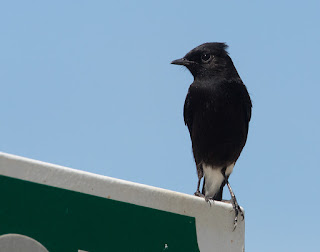 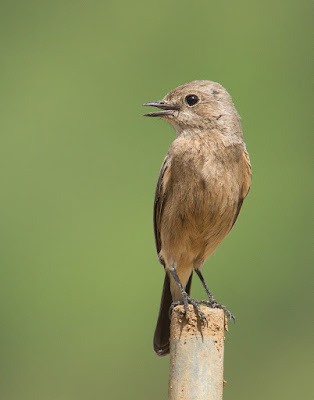 Eastern Cattle Egrets were among the cattle, of course! 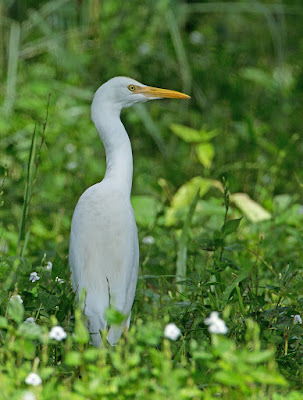 I told Cynthia, that we already got a lot of bird photos but none of the Grey Wagtail yet (which we always see on the road). So another obligatory shot was made. 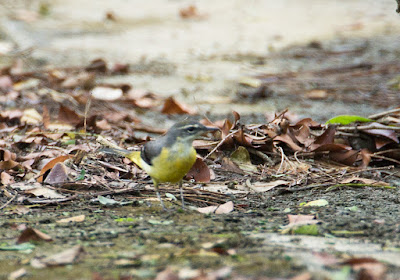 It was already 11 am and we agreed to call it a day. On the way out, we encountered a Blue-throated Bee-eater. 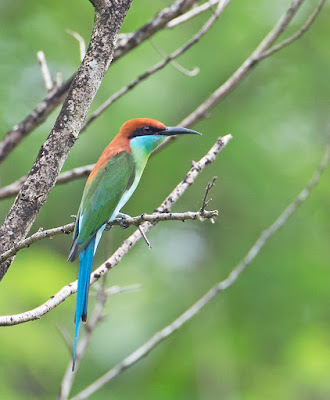 It was another fruitful birding day in Baras made even more enjoyable by some uncommon birds we saw and the company of the Band of Barasers.