Friday, July 1st, was a very hectic day at the office, perhaps THE most hectic day ever in my 5 years or so with this Division of our company.

So I decided to make the most of the coming long weekend. Plans were made to go birding in San Diego, one of the places we have not been to yet.
Awakened at around 5:30 am by the incessant twittering of the neighborhood mockingbird, we lazily got out of bed, packed an overnight bag (we planned to bird for two days there) and off we went. The sun was already up although the skies were a bit overcast. The drive was smooth and we reached our destination in about two hours. The place was called Dairy Mart ponds, I guess because of the various cattle farms on each side of the road. At the end of the road was Border State Park, aptly named for its proximity to the Mexican border. But the gate was closed! The sign says the gate opens at 9:30 am so we waited and birded the vicinity for a while. We saw a prairie falcon just beyond the gate perched on a telephone wire. I grabbed my camera gear and with the stealth of a stalking leopard approached my quarry. But, the keenness of the falcon's eyes were better than my best stalking capabilities and it flew away just as I was about to focus my lens on it. That was a portent of things to come, an omen that the vast conglomerate of feathered conspirators are trying to inculcate in my addled brain. 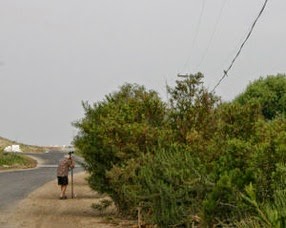 But then once in a while, lady luck would smile and I would spot a Blue Grosbeak. Not really my best shot - the bird was a football field away. 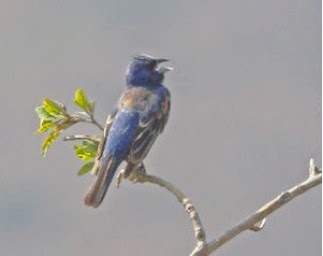 We also heard (a lot) and saw (once) a Yellow-breasted Chat but its picture was denied me. After a wait of about an hour (and I thought Americans were punctual) the gate was finally opened and we proceeded to the park which overlooks the ocean and the city of Tijuana, Mexico. We were so close to the border that the bullring was just a stone's throw away (Ok you have to be a big-league pitcher to be able to throw that far. Ok, ok, you have to use a slingshot). 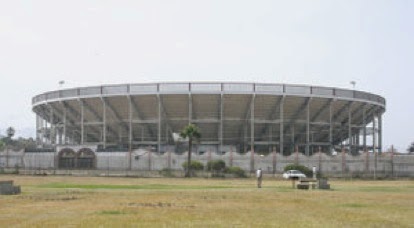 The Border State Park was quite unproductive, bird-wise, so we proceeded to the Tijuana Estuary where we met up with some local birders who were quite agog over some rare species that was found in the area. It wasn't long before Don, one of the birders, shouted, "There it is!". And there it was, in all it's glory just a few feet away from us - a Yellow-crowned Night Heron. The uncommon bird just stayed there in the creek doing what night herons do, unmindful of the throng of bulged-eyed, jaw-hanging bunch of elderly (and not-so-elderly) people just going ga-ga over it. I, of course, took that opportunity and just fired away. 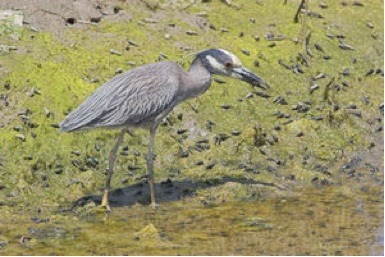 We were even given a bonus by the sight of a mother Clapper Rail escorting her two chicks across the creek.
Having our fill of these beautiful birds, we then decided to satisfy our cravings for something more mundane.  A stop at Margie's Karihan nearby (a Filipino restaurant in San Ysidro? Wow!)  calmed the growling beast in our bellies. Flushed and energized by Bistek and Sinigang na Baboy we proceeded to Lake Murray in Chula Vista. The place turned out to be a dud. Next stop was Mission Gorge where, we were told, we will find lots of Blue Grosbeaks and Yellow-breasted Chats. Well, we didn't see those birds, not even one! But we did see a Violet-Green Swallow which was a lifer for me. (Note to the uninitiated: A lifer is a bird that you see for the first time in your life, which, of course, will be added to your life list - a list of all the birds you have seen in your lifetime). 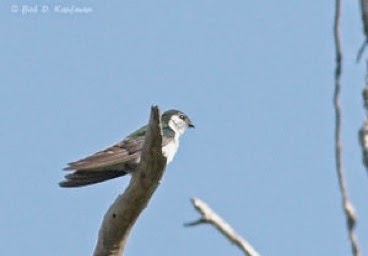 We also saw a Yellow Warbler (or is it?) but as I have said before, the feathered conspiracy was up against us.
It was getting late in the afternoon, the heat was sweltering so instead of spending the night in San Diego, we decided to return home. We just felt that we had birded the San Diego area to the hilt and one more day there would not bring anything new to our list. We took the I-15 route going back. It was then that I decided to fulfill a long-time promise to Cynthia that I will take her to this fabulous seafood restaurant in Temecula. Vera Cruz is still the same as I remember it; cozy, with a huge aquarium lining the walls. The 30-minute wait was worth it as we gorged ourselves with shrimp, scallops and filets of fish skewered and grilled to perfection. We drove home heavily laden. We were in a state of semi-stupor when we got home and it didn't take long before we were off to slumberland. It was a good day.
Posted by Bob Kaufman at 4:22 PM