It's Too Darn Hot!

Prologue:
We were having a heat wave in Southern California. The temperature has been soaring into 3 digits for the past week or so. Mind you California heat is not humid where you sweat a lot, but rather dry and piercing that it literally hurts the skin.  It will be the same weather condition this weekend said the all-knowing weatherperson. To bird or not to bird?..that was now the question. First, a little story:
Birder's Wife: Darling, would you please take out the trash.
Birder Husband: What? Don't you know how hot it is out there? Why you could even fry an egg on the sidewalk!
A few minutes later...
Birder's Wife: Honey, look, the newspaper says they just saw a Lesser Roadrunner near Death Valley!
Birder Husband: So what are you standing there for? Get dressed and let's go! Oh, hand me the trash, I'll throw it before we get into the car.
Birders are not ordinary people. They will cross the burning desert, climb the highest mountain, sail the seven seas just for a glimpse of some feathered creature. And thus plans were prepared for a birding foray this Saturday – heat wave be darned.
Part I. A Walk With Butterflies.
Our plan was to go to Malibu Lagoon, 22 acres of marsh and tidewater pools close to the famous Malibu Beach, playground of dudes and dudettes. Along the way was Malibu Creek State Park, a bit of wilderness amidst the Santa Monica mountains a thousand feet above the Malibu coast. We decided to pass by this patch of forest and see what it had to offer, bird-wise. We arrived early, a little before 8 am, and walked along a trail with the creek to which the place was named for on one side, and a meadow-like slope, dotted with a few trees and bushes on the other side. What made this scene even more beautiful was the proliferation of butterflies - different kinds from the yellow tiger swallowtail, to the tiny white cabbage butterfly. They would criss-cross our paths, or occasionally accompany us part of the way. Their presence punctuated our countless stopovers and provided an exhiliration that lessened the scorching effect of the unforgiving sun.
The first bird we saw was a wren that was not unlike a moth-eaten piece of rag. It was dust-bathing in the sunlight apparently to rid itself of some feather-eating bug or heaven-knows-what.
Then there was an explosion of phainopeplas. Phainopeplas - the name means "silky robe" and conjures up images of some exotic, brilliantly colored, epitome of God's creation in the avian genera. Actually it is a medium-sized (about 8 inches) black (male) or brown (female) bird with reddish eyes and a crest. It's song is a trill somewhat akin to a police whistle. This bird was not new to us but here at Malibu Creek, they're just everywhere! Needless to say, I got some good photos of this species. At some point on the trail we were on a higher level than the creek alongside, so much so that we were almost eye level with the top of the trees that grew along its banks. 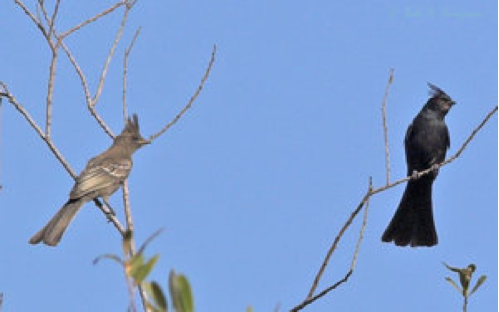 I was trying to get some pictures of yet another group of phainopeplas when Cynthia shouted, "woodpweker!". As you might have learned by now, whenever she gets excited at seeing a new bird she baptizes the poor thing with a new albeit funny name. And so I added an Acorn Woodpecker to my list of birds photographed that day. The crowning glory of our visit to Malibu Creek was - at last! - a decent picture of the Blue Grosbeak (yes, it's that bird again), a male and a female to boot! 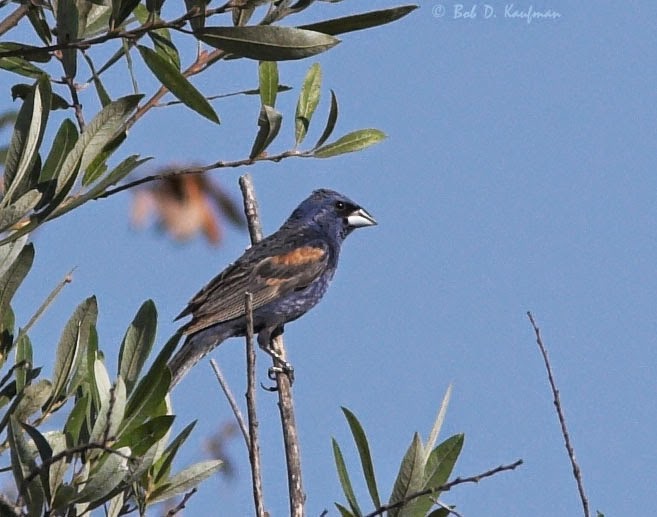 At about 10:30 am, we came upon a sight that would break any birder's heart - a group of noisy (and loud) picnickers (including not a few overweight women in bathing suits!) Bear in mind, this was a creek that we have here, that is so shallow even a tiny bird will not drown in it.  Maybe these ladies know something we don't? hmmm. Not desiring to witness what could be a miracle in the making, we decided to pack up and head for our original destination - Malibu Lagoon.

PCH, which stands for Pacific Coast Highway is a stretch of road that runs through California and at various instances comes close to the Pacific ocean.


As I mentioned in Part I, our original destination for this day was the Malibu Lagoon which is right by PCH. We were stunned when we arrived there. The parking lot was full and the place was teeming with people! We should have known better not to go to a beach on a sweltering weekend.
We vented our somewhat dashed  enthusiasm over a footlong cheesesteak sandwich at Subway. We resolved not to let this little setback ruin our birding day. There is still Bolsa Chica which was also along PCH but unaffected by the throng of beach-going heliophiles. Now in going to Bolsa Chica from Malibu, we had to pass thru various cities in the southern part of the Los Angeles megalopolis. Note: PCH is not a freeway and on certain spots becomes a normal thoroughfare complete with traffic lights and all the denizens that come with an urban street.
And so with this in mind, we began our trek of the 50-odd miles to our new destination.  Cruising PCH we passed by some affluent neighborhoods where a condo would cost anywhere between $600,000 to a million and then just a block away the scenery would change so abruptly and we would see squalor and very palpable poverty. There were cities where it seemed that we were in a Mexican town complete with billboards and signs in Spanish and not a single Caucasian in sight, whether in cars or on the streets. As we passed by Long Beach, Cynthia saw Ken Malloy Regional Park (a supposedly good birding area) but when I was about to pull over I noticed that the people using the park at the time were the kind that I wouldn't want to be seen toting $3,000 worth of photographic equipment even in broad daylight e.g. half-naked tattooed men basking in the sun (and they were not even close to the beach!)
About an hour-and-a-half later, we saw the familiar sights of Bolsa Chica. Inasmuch as it was already past noon, we took a break and had a sandwich and a shake at Jack in the Box. Being the only fast food restaurant nearby. There is also a public beach in Bolsa Chica but PCH separates it from the Ecological Reserve thus sparing the nature area from the beachcombers and the traffic.
The place was packed. Once again satiated with food, we proceeded to bird Bolsa Chica. If Malibu Creek had its phainopeplas, Bolsa Chica had its terns. Everywhere you turn, there were terns. It wasn't very productive photography-wise because terns do nothing but fly it seems like, and the peeps (a generic term for those shorebirds that appear to all look alike even if they belong to a dozen species or so) were all so far to be photographed even by my 300mm lens.
We called it a day at around 4 pm. It turned out not to be too hot after all - Malibu Creek had some tall trees which offered shade and a cool soft wind every now and then, and then Bolsa Chica of course had its ocean breezes to give relief from the unshaded glow of the afternoon sun.
Posted by Bob Kaufman at 2:18 PM