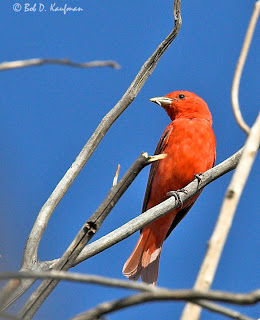 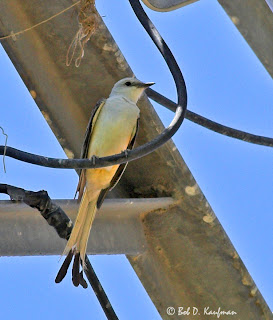 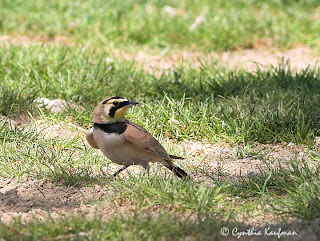 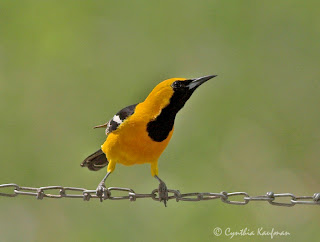 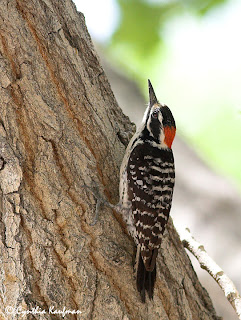 Reports that not one, but three (2 males and a female) Rose-breasted Grosbeaks were seen at the feeders at the Big Morongo Preserve gave us a good excuse to go back there on Saturday, May 19th.

This time I purposedly left my big gun, the 500mm, at home. I wanted to give my new 100-400 zoom lens a real workout, so to speak. Cynthia thought that having a 1.4 extender attached to her 300mm slowed down the autofocusing somewhat so she went back to her original set-up

Just right after we got off the jeep we both immediately caught a glimpse of the bright red of the Summer Tanager flash overhead. And there perched on the fence by the parking area was its less gaudy but also beautiful mate giving us the eye.

We joined the bird walk led by Dee Zeller (who also gave us the bad news that the grosbeaks were gone). Just as we were entering the boardwalk at the start of the Marsh Trail, we were greeted by a very tame Gambel’s Quail doing a morning call. Soon, Margaret, a member of our group started listing names of birds heard along the trail.

“That’s a Verdin.” There’s a Bell’s Vireo, and another one on the opposite side”, she would announce to the group. It was quite frustrating for us photographers since these birds were all hidden among the foliage around us. The highlight of the walk was an Olive-sided Flycatcher (also located by Margaret) which was a lifer for us. We eventually tallied 38 species, but unfortunately, only a few good shots. Throughout our walk on the Marsh Trail we were accompanied by a pair of Western Scrub Jays staying close to us that you could almost touch them. They are having their own people-walk, seems like.

Still being early, we decided to go to Luckie Park in Twentynine Palms to try to locate the Scissor-tailed Flycatcher recently sighted there. We parked at the northwestern side of the recreation area close to the ballfields. There were lots of birds; Great-tailed Grackles, Brewer’s Blackbirds and tons of Horned Larks, even a pair of White-winged Doves, but no Scissor-tail. In our perambulations, we met Matthew Baker who has been scouring the area looking for the same quarry but have not had any luck either. We whiled away the time shooting at the Horned Larks. It was almost noon and we were beginning to feel the pangs of hunger. Visions of McDonalds soon began dancing before our eyes. Our reveries were suddenly interrupted by shouts of “There it is! There it is!” Matthew finally spotted the long-tailed bird and we all rushed to where it was perched. This was one of those moments when I wished I brought along my 500mm lens. Nevertheless, our mission was accomplished and we now proceeded to satisfy one of man’s basic needs. An Angus third pounder never tasted this good!

Back at Morongo, after a well deserved repast, we settled into a more sedentary activity. We sat by the feeders watching and photographing the comings and goings of various avian species which included a Mountain Chickadee, Bullocks and Hooded Orioles, Costa’s Hummingbirds, a Nuttall’s Woodpecker and the usual denizens of House Finches, Anna’s Hummingbirds, and Lesser Goldfinches.

Around 2:30 pm, we decided to give the Marsh Trail one more look-see. By the spillway, we discovered the Bell’s Vireo and its nest. Along the route, we bumped into several kinds of Flycatchers whose identities completely buffled us, particularly those darn empidonax species! Near the end of the loop, several birds were playing king of the hill, or in this instance, king of the bare limb. A Western Kingbird, a Brown-crested Flycatcher, an intrepid young Western Tanager and a feisty Western Wood Pewee would perch into this bare limb after hawking some unfortunate insect, only to be dislodged by the next species. Once in a while a Black Phoebe would even join the fray. Warbling Vireos and Wilson’s Warblers, on the other hand, were busy working the surrounding greenery.

We hated to leave such interesting antics but we still have some 120-odd miles to drive. It was a fun day, made even more enjoyable by finding new friends who share our passion for birds.

And by the way, this was one session where my wife had the better shots.