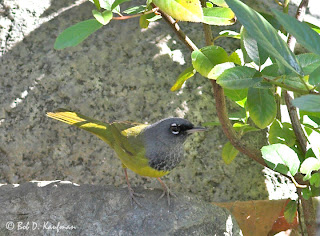 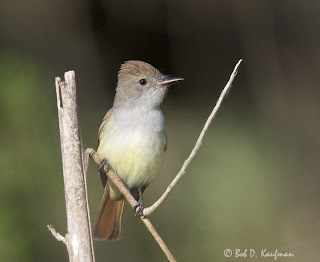 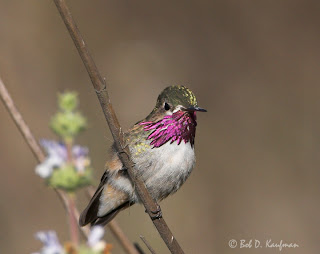 At 5:30 pm the sun was still up so we decided to break out of the routine and go birding after work. Eaton Canyon in Pasadena is an easy 15-minute drive from Cynthia's office. Monday, April 16th, on a whim, we gave it a try. No cameras, I told Cynthia. This will be strictly birding activity only.

Binoculars hanging from our necks, we first explored the area east of the Nature Center. Just behind the building, we were serenaded by a House Wren singing full volume unmindful of two mesmerized human beings. Reluctantly we left the brown-feathered songster and as we turned to follow the eastward path, a Bobcat poked its head around a low bush, looked at us and disappeared quietly.

Close to the trail were some white sage flowers. It wasn't long when my wife suddenly exclaimed, "Hummingbirds!" They were probably the common Anna's, I told her. But then, peering through my binoculars, I noticed a little buff on the body and the streaky gorget. "Calliopes!", I excitedly announced. Thrilled by discovering a lifer for us, we moved on further south where the sycamores are.

Soon, Cynthia's super ears picked up different songs from up a tree. It wasn't long when a Black-throated Gray Warbler exposed itself, then we spied a bright yellow Wilson's Warbler. Both our jaws dropped when one after another warblers darted from the sycamore to the oak trees - Orange-crowned, Nashville and the beautiful but uncommon MacGillivray's (another lifer). By the picnic tables under a huge oak tree, Pacific Slope and Ash-throated Flycatchers were catching flies. A pair of Spotted Towhees flew by while California Towhees were so tame you could almost step on them.

North of the Canyon, we saw Allen's and Rufous Hummingbirds while House Finches and Goldfinches flashed their colors from the setting sun. Cynthia then pointed to a slow-moving mass of black and white. "Are those skunks?" she asked. "Yes, three young ones!" I replied. It is not often that you can see skunks during daytime, but here they are all three of them venturing out even before dusk fell.

"Oh, if only we had our cameras", Cynthia lamented. "We'll come back tomorrow", I promised her, "and this time we'll be adequately armed".

We did return the following day. But then it was gloomy and windy. Murphy's law at its fullest effect. And again, we tried on Wednesday afternoon. This time, the sun was up, the weather was nice. Although we got some really good shots of the birds we saw last Monday, they were not as conspicuous and cooperative as when we were simply birding.