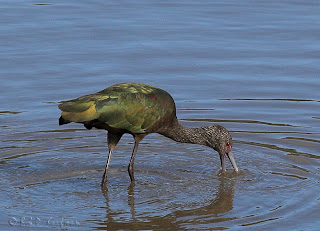 Battling with neck and shoulder pain, (ah, the travails of getting old) I still asked Cynthia that we go birding Saturday afternoon. I wanted to see the reported Wilson's Snipes at the Irvine Civic Center as it would be a lifer for us.

I don't know what happened, but plans changed when we exited Jamboree Ave in Irvine. We ended up at the San Joaquin Wildlife Sanctuary instead. After looking at the various duck species at the ponds, we checked out San Diego Creek (afterall it was in this creek that the snipes were seen, albeit further upstream). Down below was a White-faced Ibis nonchalantly feeding among the Killdeers. We saw this bird as we drove in but when I got off to get a better look at it, it was spooked by a low-flying Red-tailed Hawk. Which prompted my wife to declare that it was a "scared" Ibis - an intended pun against the Sacred Ibis of Asia. Witty, my wife is.

Having gotten some good shots of the wader, we proceeded to Upper Newport Bay to look for the Short-eared Owl. Dipped on that one (although some birders saw it a few minutes after we left). Oh well, c'est la vie. At least we got eye-level shots of an American Kestrel and a very busy Say's Phoebe.

We passed by San Joaquin again on the way home where we met fellow photographer and Blogger Glenn Price & Felicia Lee, respectively, who were just about ready to leave, too.

That evening at Wal-mart (a good place to end a birding day, at least according to my wife), we met fellow photographer Jimmy Chen and his wife Susan. We may not have been that successful in seeing our target birds but meeting friends definitely added nice memories for the day.
Posted by Bob Kaufman at 10:06 AM