The rains finally stopped this morning. I decided to take advantage of this respite to do a quick birding/photography at nearby Eaton Canyon. I wasn't expecting much, the day still dreary and cold with only an occasional glimmer of sunlight.

Instead of going behind the Nature Center as I usually do, I thought a change of direction would yield better prospects. First bird seen was a lone Anna's Hummingbird perched forlornly on a dead branch. Then nothing. As I approached the fenced off corral (used by the equestrian folks next door), a very skittish Say's Phoebe was hawking for insects. I move one step towards it and the bird would fly off to the other side of the corral. This happened several times that I almost titled this blog: Say No More. (har, har). On one occasion, while chasing the elusive phoebe, a larger brown bird flew by and caught my attention. Thinking it was just another Mourning Dove, I was about to continue my pursuit when the brown bird flashed some orange and soon alighted on a concrete structure near the fence. Peering through my binoculars, I was a bit surprised to see an American Kestrel. And the Phoebe was perched only a few feet away from it! Irony of ironies! Here I was only harmlessly desiring to take it's picture and the darn flycatcher avoided me like the plague and yet it would fly close to a known bird-killer! Strangely, the Kestrel paid no attention to it.

Frustrated, I started the trek back to the Nature Center only to make an abrupt halt. A little brown bird was hopping near the trailhead, itself looking for some hapless insect. I stood there almost awe-struck as the Rock Wren paid little notice to me and just did what hungry little Rock Wrens do at this time of day. This was the second time in the month of December that I was photographically rewarded by this cooperative species. 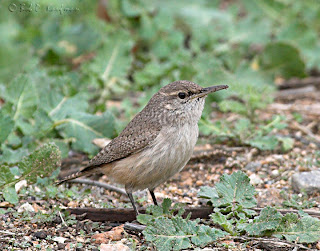 Back at the Nature Center, I dipped on the White-throated Sparrow but had good looks on a pair of Golden-crowneds. And what has now become a normal routine whenever I visit Eaton Canyon, I got serenaded by Hermit Thrushes.

North of the Center, I got some good shots of my target species by standing behind a dumpster (thank God it was empty). Three California Thrashers were sifting through fallen leaves looking for some tasty morsels. One, thinking I was just some pile of garbage, came close enough for a good photo-op. 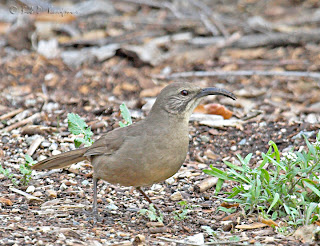 With two notches in my belt and the morning still young, I was feeling lucky. The third notch came a few minutes later and was a total surprise for me. A few blogs ago, I had an "oh darn" moment from my last visit to this place. I saw but failed to photograph a Fox Sparrow. This time as I passed a small puddle behind a picnic shed, I noticed some movement from the corner of my eye. I stopped and remained motionless. In a short while, a Fox Sparrow appeared from underneath the bushes and plopped into the puddle. Why a tiny bird would bathe in 50 degree weather is beyond me. I wasn't arguing with nature as I happily captured for posterity the private ablutions of an uncommon sparrow. 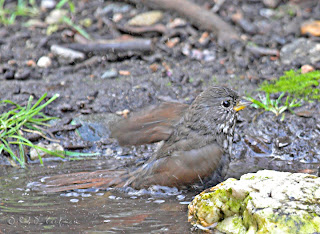 Dark clouds soon began to gather and then my cellphone rang. My former co-workers were inviting me to lunch at a Thai restaurant. I got my 3 notches without so much of a sweat and now looking forward to a free lunch. I was singing in the rain that afternoon.
Posted by Bob Kaufman at 11:56 AM