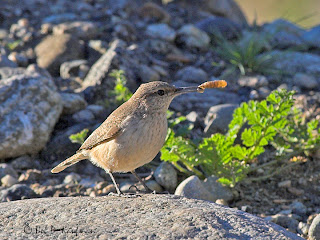 Passing by parking lot number 3, I noticed a small brown bird hopping on the rocks. Was this the same wren I saw several months ago and took some very bad pictures of? So bad that I can't properly identify the bird. I hastily parked the Jeep and rushed over to the pile of rocks near the road. This time the wren stayed put as it was busy trying to devour a rather large worm. Lighting was not that perfect, but hey, a photo-op is a photo-op. Having finished off its wriggly prey, the little brown bird flew off to some place not accessible by bumbling humans.

I continued driving and as I passed by parking lot number 4, there was another wren atop a small rock by the roadside. It's deja vu all over again as Yogi Berra would say. Parked the Jeep, ran to where the bird was and took photographs like crazy. This time the light was much better.

Later as I was talking with fellow birders, Tom and Jim, I showed them the images I took of the wren and both of them confirmed that it was indeed a Rock Wren. Woo-hoo! Until today I have not had the good fortune of getting a decent shot of this species.

Tom and Jim were looking for the Mountain Bluebirds reported seen here. They dipped on it, but I not only saw the birds, I got pictures of them to boot. That's the advantage of arriving early at the scene, I guess. Aside from the Rock Wren and the Mountain Bluebirds, I got really good shots of a Cooper's Hawk, an American Robin and three kinds of Geese: White-fronted, Cackling (Aleutian subspecies) and Ross'.

After lunch, I proceeded to Eaton Canyon hoping to refind and rephotograph its rare visitor - the White-throated Sparrow. As I approach the back of the Nature Center, a lady who was in the patio at the Nature Center itself, yelled and said, "The White-throated Sparrow was found there", waving her arms towards the east. "Lady", I replied, "I'm looking right at it." The bird was there in front of me giving me a curious eye and was only about 20 feet away from my helpful guide.

My perambulations at the park yielded shots of Wrentits which came so close to me that my camera couldn't even focus properly. Bewick's Wrens were frolicking everywhere. Then there were my dear friends, the Hermit Thrushes, who always provide good photo-ops. This time I actually heard their song (which is really something, considering I'm a bit hearing impaired). My only "oh, darn!" moment was when I saw Fox Sparrows but weren't able to get pictures of them. These birds were so skittish!

I'd say both luck and patience paid off today.