Any self-respecting Southern California birder would naturally want to see the Roseate Spoonbill hanging around the Santa Ana river in Orange. I still got some little self-respect left so despite the fact it had just rained, I joined the flock of eager birders Friday morning to look for the rarity. I'll make it as quick and as painless as possible. We dipped.

All the hopeful chasers left at around 11 am. It was just my friend, Raul Roa, and myself who remained. We looked at each other and agreed that we should give up as well. I gave Raul directions to Peter's Canyon so that he can save the day by photographing the friendly resident Roadrunner there. I hoped to save my day by going to San Diego Creek behind the Irvine Civic Center parking lot and photograph the Wilson's Snipes seen there.

Wilson's Snipes would be a lifer for me - all I have to do is find them. I quickly surveyed the creek which was flowing furiously after last night's downpour. There were some gray-streaked birds foraging for food by the creekside. Could they be...? Binoculars said they were Lesser Yellowlegs. I went a bit upstream where a lone Cormorant was drying itself. As I came closer, a duck-like bird with red head that seemed to have a bad-hair day plopped into the water. Binoculars said it was a female Common Merganser! Despite it's name, Common Mergansers are not that common in Southern California waters, particularly in a fresh water creek. 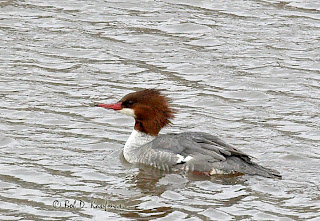 Thrilled by that discovery, I ambled downstream to search for my original quarry. I focused on a suspicious looking clump of twigs in the middle of the creek. Something moved! A Cinnamon Teal. Slowly, I scanned every bit of vegetation and other detritus accumulated by the flowing waters. I'll make it as quick and as painless as possible. I got my lifer. Lifers, actually, for there were about six or seven of them. 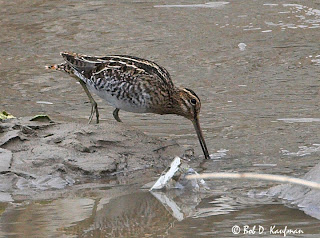