A Brush with Fate

Brush Cuckoos (Cacomantis variolosus) aren't supposed to inhabit urban areas. They should be found along coastal mangrove or montane forests. They are usually more heard than seen. At least that's how the field guide describes its characteristics. When news came out that not one but two Brush Cuckoos were found at the campus of the University of the Philippines, all self-respecting bird photographers wanted to take a shot at them.
Inasmuch as some members of the Philippine Bird Photographers group will be attending a post-processing workshop at my house on Saturday, September 4th, we thought it would be best if we all meet first at the spot where the said cuckoos had been sighted. After all, U.P. is a mere 15 minutes away from home. My fellow birdnuts (the term we use to call ourselves) started arriving at the "barbet site" (this was also the place where a Coppersmith Barbet nested last April and gave all of us some great photo-ops). For two hours we tried taking pictures of anything with with feathers in between engaging in some shop talk just to while away the time. Past 9 am and the cuckoo was still a no-show and a few of us were going cuckoo. Some even started packing their gears. I did not want to leave yet because I wanted to give my wife (who was at home, cooking) ample time to finish the refreshments that she will be serving during the workshop, so I asked for a little more patience and even pointed out a Pied Triller that showed up so they could spend time taking pictures of it.
Then it came. The adult Brush Cuckoo flew silently (!) from tree to tree and closer and closer to us. Shutter bursts filled the morning as birdnuts went nuts in trying to get a good shot of this uncommon bird. At that time I was using my 40D, 100-400 combo. Later that evening as I was processing my cuckoo shots I was terribly dismayed (a huge understatement) to discover that all - let me say that again - all of my shots were blurred! Then I remembered that a couple of days earlier, this particular lens fell on the floor as I was unpacking my gear. That must have damaged its focusing ability. Imagine how I felt, getting really open views of a Brush Cuckoo and not getting one good photo! Woe of all woes!
My wife, sensing my sour mood, suggested we give it another try. The following Wednesday, early in the morning we were once again at the "barbet site". A little before 8 am we were surprised to see cars coming and parking at our hallowed ground. We then realized that it was a weekday and we are right in front of a daycare center! Parents and "yayas" (caretakers) tugging small children started pouring out of the cars and lining up at the doors of the building. My heart began to sink. How can an uncommon cuckoo show up in such a noisy environment? At eight am all the children were inside the daycare center and the parents got back into their cars and drove off. At about 10 minutes after eight when things relatively quieted down, the Brush Cuckoo came. This time it did not fly closer and remained on the high branches of an acacia tree. But I was prepared. This time I brought my 5DMkII, 500mm+1.4x combo. Alas the cuckoo stayed in the shadowy recesses of the tree. I fired in bursts hoping that I would get lucky and get a "good-enough" shot.
Anxiety filled my heart as we rushed home and I started uploading my pictures. The first few shots were too dark that not even the best post-processing techniques (which I learned last Saturday) could salvage. Then the next one and.. hmmm... that looked okay. There were a few more that I thought would at least show the features confirming it was indeed a Brush Cuckoo that I photographed. And yes, thankfully, there were quite a few. 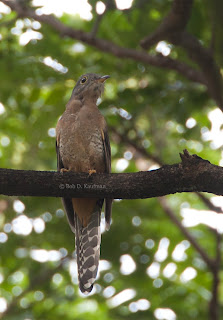 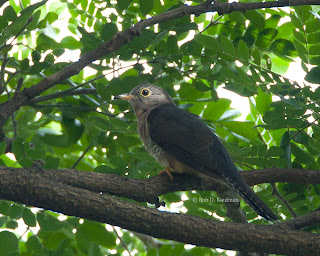 For other (less cuckoo?) birding blogs and photographs, please visit:

Don't know how much PP you had to do on those photos but they look great to me. I'm glad you had a second chance and were able to get some photos. Hope the other lens is able to be fixed!

Enjoy reading your blog and learning about wildlife in your region.

You had me worried for a while reading this post Bob. I'm glad to see that all was not lost. These shots of the Brush Cuckoo are marvelous! I love that second shot with just a hint of sun coming through to show that golden eye ring.