My wife and I came to Davao basically for three reasons: to visit Cynthia's brothers, to be a part of the First Asian Bird Fair and oh yeah, to go birding.


We decided to go earlier than the scheduled Bird Fair which was going to be held on the 24th and 25th of September so that we could fulfill reasons 1 and 3 (we thought that it would be better to "case the joint" before the throng of participants in the bird fair go there). A little before noon of Sept. 21, we were aboard the Cebu Pacific airbus that would take us to our destination in southern Philippines. When the stewardess offered some snacks and drinks we readily availed of such goodies (it was lunchtime after all). Major, major mistake! We were surprised when the stewardess asked for P280 for a couple of pastries and 2 cans of soda. Being our first time to fly Cebu Pacific, we were clueless as to their policies when it came to serving food. Apparently they were not free. Lesson learned. On our return flight, as soon as the stewardess offered snacks, we took out the food that we brought along with us and smiled lovingly at the flight attendants. Anyway, about two hours later, we were relaxing at the home of Chito (Cynthia's brother) and his wife, Terry, enjoying the fresh fruits that they served.

Day 2 - A Taste of Paradise
The following day, Sept. 22nd, Chito drove us to the Eden Nature Park and Resort. As soon as we have checked in (thanks to the management and staff, we were allowed to check-in earlier than the official time), we immediately explored the trail right next to our cottage. Just at the start of the path, we saw a White-bellied Munia. But the Munia was too deep in the vegetation that it was next to impossible to photograph it. Surveying the narrow and long mountain trail ahead of us we both agreed not to continue the trek justifying our decision by excuses like "the path is too narrow for my big lens/tripod combo" and "the forest cover is too thick that the sunlight barely reaches the ground - not good for photography". Actually the fact that trail loop was about 4 kilometers long and included some 45 degree inclines (note the plural) were just too much for our ancient legs.
So we turned back and instead explored the grounds in front of our cottage which was dotted by tall pine trees. This was where we got our first lifer of the trip: The Everett's White-eye! Inasmuch as it was nearing lunchtime, we ambled towards the restaurant where we saw some Philippine Bulbuls and our second lifer, the Orange-bellied Flowerpecker.
Everett's White-eye 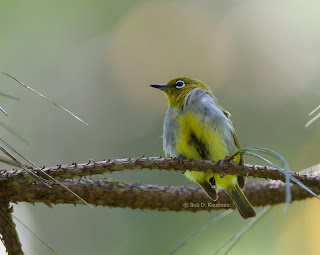 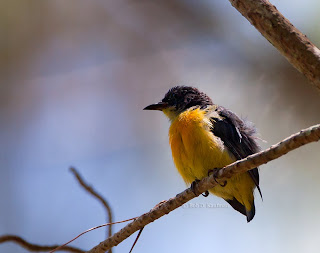 Lunch was a sumptuous buffet (the first of many that we will have in Davao). Here we were joined by Guada Gamboa, Eden Nature Park's Marketing Assistant. She introduced us to the resort managers Celia and Tina. Cynthia and I took this opportunity to sell them the idea to promote Eden Nature Park and Resort as a birding area. All three ladies were enthusiastic and promised that they will take our suggestion to upper management.
That afternoon, the sweet ladies of Eden sent one of the resort's drivers to give us a private tour. One of the places the ladies asked the driver to bring us to was the zip line and soccer field. There are always birds sitting on the wires they told us. They were right, of course! As soon as we got off the tram, White-breasted Wood Swallows were lined up on the electrical wires (and on the tree branches, too) , occasionally swooping down over the soccer field and then returning to their perch. Here a Long-tailed Shrike hunted for bugs a mere 12 meters away from me. It would perch on a wire then fly down on the grass, grab an insect, swallow it and fly back to the wire perch. This routine was repeated several times and I just stood there enjoying the scene. And sometimes getting distracted by a Richard's Pipit sunning down the slope and a Striated Grassbird that popped out every now and then beneath the wire which the shrike uses to spot for prey.
White-breasted Wood Swallows 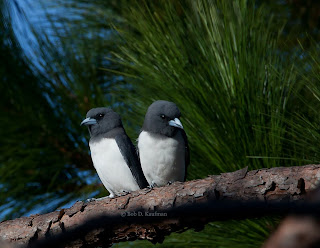 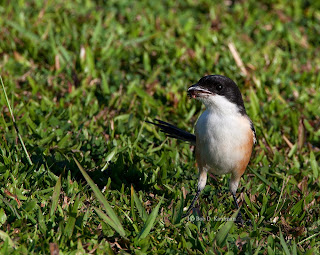 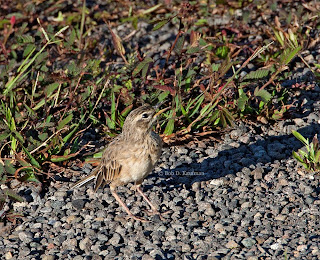 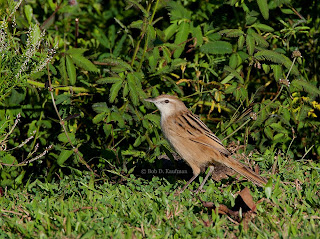 Cynthia, who was trying (and failing) to take pictures of the wood swallows in flight, called my attention when she saw a kingfisher suddenly fly across the soccer field and alighted on one of the goal posts. As I turned to go after it, a Spotted Dove walked slowly in front of me. After it entered the dense grass of the field I turned my attention back to the kingfisher which turned out to be a White-throated.
Spotted Dove 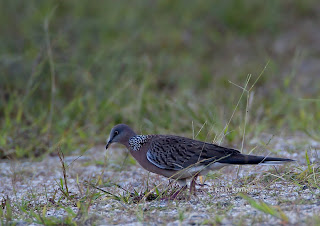 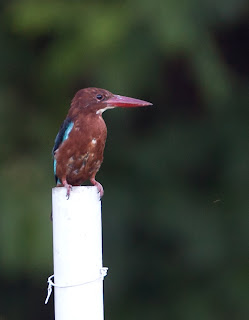 At around 5 pm, the driver came to pick us up. We had an early dinner and retired back to our cottage shortly after. The cool mountain air felt so refreshing and it wasn't long before we were fast asleep.
Posted by Bob Kaufman at 4:24 PM