The Eagle has Landed

The campus of the University of the Philippines in Diliman, Quezon City had become renowned for producing unusual birds every so often. In October of last year, a pair of Java Sparrows decided to start a family near the library and became an instant sensation. That was followed in November by a Blue Rock Thrush that had everybody (including myself during a visit to the Philippines) going ga-ga. December, it was the Philippine Scops Owl. And on and on it went. Recently it was the Brush Cuckoo(s)? that drew bird photographers from all over MetroManila to U.P. Just as the cuckoo's popularity started waning, a new star was born!
Welcome the juvenile Philippine Serpent Eagle.
The morning of Sept. 13th, I received a text message from fellow birdnut Bert Madrigal saying that he, Propjerry, Doc Mando and Alain, were looking at a Philippine Serpent Eagle at the "lagoon" (actually a small patch of forest) in front of the Engineering Library. It was close to noon so I texted him back saying I'll be there after lunch.
One-thirty in the afternoon. My wife and I were already having neck pains resulting from scanning each and every branch of each and every tree in the lagoon. And not finding the eagle. Despite the help and encouragements from the two security guards manning the area, we broken-heartedly left U.P. after two hours.
That night eye-popping pictures of the Serpent Eagle were posted in the Philippine Bird Photography Forum. I resolved to go back and try again. Looking at my schedule for the coming days, however, sank any hope that I had been harboring. Tuesday, I need to take my wife to her appointment at her former office. Wednesday morning, we would be visiting a friend's house in Antipolo where he said there were some birds in their backyard. Thursday we are banned from the main streets from 7 am to 10 am. (This was a local ordinance passed to ease the traffic in MetroManila at peak hours and was based on the last number of the license plate). So it will be only on Friday that I will be able to return to U.P. That seemed like a long wait. *sigh*
Tuesday night Cynthia called our friend in Antipolo to confirm our planned visit the next morning. He apologized profusely explaining that something came up and that they will not be home to entertain us. My wife then told me that now we can go to U.P. on Wednesday morning.
Six-thirty in the morning, we were craning our necks scanning each and every branch of each and every tree in the lagoon. The guard on duty that morning, bless his soul, suggested we look at the balete tree near the bamboo grove. That's where the young eagle usually hunts for food in the morning he explained. Sloshing through the muddy field, I espied what I initially thought was a chicken searching for food among the dewy grass. But it seemed quite big for a chicken. I looked through my camera lens and couldn't believe my eyes. "There it is!" "There it is!" I yelled as I slowly moved towards the raptor. (If you read my blogs regularly, you'd notice that I have yelled those exact same words everytime I spotted our target bird. I firmly believe that it's hard to be verbally creative in situations like those). 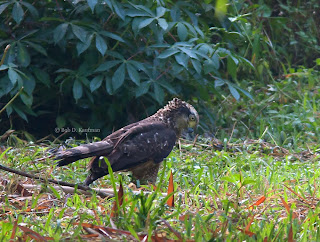 Pardon the disgression. As I was saying, I moved furtively next to the clump of bamboo. Inasmuch as I was only using my 300mm lens with a 1.4 extender, I needed to get as close as I can without spooking my quarry. Holding my breath I fired off a burst of shots hoping that despite the distance and the not so conducive light, I would be lucky enough to get a few good ones. As I exhaled slowly, the bird flew. It flew and I had no idea where it went. 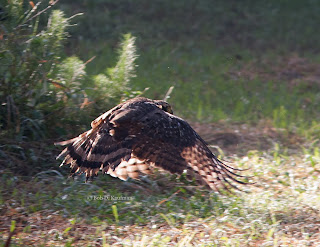 The effect of adrenaline rush oozed out my trembling body. I was relating the story to my wife (she stayed behind when I saw the eagle on the ground) when birders Rhea and Boboy joined us and asked the expected, "Have you seen it?" I animatedly told them of my short-lived encounter with the Philippine Serpent Eagle. I was waving my arm to show them the general area where I thought the eagle went when I saw the shadow of a huge flying bird. We all ran towards that direction. This time it was Rhea who saw it perched high among the branches of a tall acacia tree. Rhea, who also had a camera, and I assumed a stalking posture and like a pack of wolves intent on capturing their prey we inched closer and closer to the tree. Every now and then we would peer through our cameras to see if the bird was now within photographic range. Silently we were joined by Doc Chito, another birdnut, as we gestured and pointed the eagle to him. Then it flew!
To our surprise it flew closer and in a more open area. We couldn't believe our luck as we started shooting away. I don't know, but this had happened to me a number of times already - when the object of my photography felt that it had given me enough opportunity to take its picture from all possible angles, then it would simply fly away, as if to say, "that's all folks!" 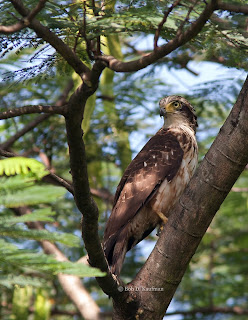 To which I always replied, "thank you!"
Posted by Bob Kaufman at 5:04 PM

you are a lucky man Bob. What an experience. An experience of a lifetime. Something you never forget. Adn lucky us that you captured the moment and shared it. :)

I love a story with a happy ending Bob. I use the same exclamation when a bird decides to give me a photo op like this one. "Thank you."

That last shot of the Philippine Serpent Eagle is most excellent! I bet you now have many of this cooperative friend.