There's a place that I heard of. An almost legendary place for birding. Particularly during migration. Since migration had already begun in earnest, I longed to be there. I called on my fellow birdnuts and persuaded them to take me to this avian paradise where waders were reportedly frolicking almost within arm's reach. My persuasive powers must have been effective because eight other birdnuts decided to take that trip with me.
In the pre-dawn darkness of Friday, Sept. 10 (which was declared a holiday by President Aquino) seven birdnuts (Alain, Bong, Dennis, Jun, Rey, Toto and myself) left Ortigas Center aboard two SUVs. At the Shell station in Alabang another SUV with two more birdnuts (Tonji and Sylvia) joined our caravan. From there we all proceeded to San Juan, Batangas - a place I would be "meeting" for the first time in my life.
San Juan at 7am! Tall coconut trees dominated the tiny village of Pinagbayanan. The owner of the fishponds that we will be birding at, Ka Instik, welcomed us warmly albeit with a hint of sadness. He informed us that the migrants have not come in full force yet. As we looked at the ponds in front of his house we immediately knew what he was saying. They were empty! Except for an Intermediate Egret in the distance and a pair of Collared Kingfishers rattling nearby, the place was devoid of birds!
But we seasoned birdnuts are a bunch that doesn't get discouraged easily. To us every dark branch has a silver feather behind it. As we fanned out to explore the area, I got a glimpse and a quick shot of a Pacific Golden Plover! Not exactly a lifer but the first time I've seen it here in the Philippines. The hours slowly crept by and the birds we were seeing were those that can be found in places like the University of the Philippines campus.
My fellow birdnuts trickled back to where we parked our vehicles. Along the way I got two lifers, the Rufuous Night Heron and Oriental Pratincole. However, both species were flying high above that I only was able to get a bad shot of the heron and none of the pratincole.
Half past ten and we were in a dilemma. With such a scarcity of birdlife shall we stay and hope for a resurgence of bird activity? Or do we pack-up and head back home? Rey's face suddenly lit up and said that since Villa Escudero is only about half an hour away, why don't we have our lunch there and continue our birding adventures at that lovely resort. Jun immediately contacted Mela, the owner (and fellow birdnut), and announced that we would be visiting shortly. Tonji and Sylvia, however, opted to return home.
Torrential rain was pouring as we parked inside the resort. Did I mention that we are a very highly optimistic group? When we saw a flock of Pacific Swallows perched on a wire enduring the heavy downpour, we all took out our gears and started taking photographs of the drenched swallows. 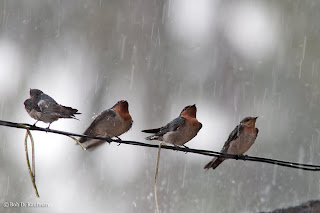 The buffet lunch at Escudero is always something to look forward to. Seven hungry guys heartily partook of this heavenly culinary fare. As if on cue, the rain stopped as soon as we finished having lunch. Again we spread out in search of our individual target birds. Some went to look for Red-keeled Flowerpeckers while others waited for the Indigo-banded Kingfisher to show up by the river. As for me I just wandered around hoping I might find something interesting. During lunch Mela suggested that we look for the snipes which she saw while she was biking. They were found near the road on the way out, she said.
Later that afternoon when we were ready to leave, we followed Mela's advice and explored the roads near the exit. Being far from the hustle and bustle of the resort, we saw quite a number of birds here. The snipes were there, of course, but were just too quick for me to photograph. On the other hand, the Richard's Pipit, Common Kingfisher and White-browed Crake were quite cooperative. 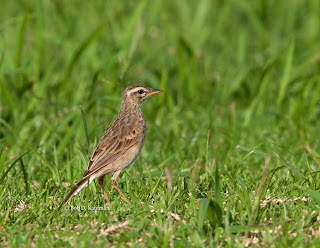 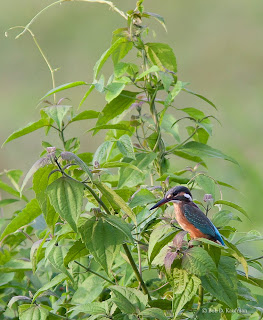 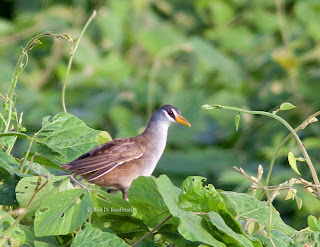 I arrived home at around 8 pm, exhausted yet happy that the disappointment of meeting San Juan was turned to gladness in birding Escudero. I'm certain that later in the year San Juan would live up to its promise. I hope to be there when it does.


For other (more productive?) birding blogs and photos, please visit:

The birds you saw are very good - but I shall wish lots of shorebirds for you next time! The shorebirds are all arriving here right now - and its raining too heavily to go out with good camera gear :-(

Timing is everything they say. I'm sure you will make it back to San Juan in time for the real migration Bob. In the meantime, what a wonderful day you had!

Kingfishers are so intriguing to me. I love everything about them and you have a real beauty there in the Common (to you perhaps) Kingfisher.

You can't beat a two-lifer day, rain or not! Love the pic of the swallows in the rain.