It has become almost mystical among Philippine bird photographers. Only a few have seen it and even fewer have actually photographed it. The Philippine Falconet is not very hard to find, despite its small stature - just a tad bigger than a sparrow. As a matter of fact it is quite common along the forest edges where it can be seen perched on electric wires or high tree branches hawking for flying insects. And that's where the problem lies. It is always up high. Because of that only a lucky few had been able to photograph the tiny raptor that shows the crown of its head. The rest of us had to to be satisfied with a view of its white breast and belly and its black back and wings if it turns around.

But then, miracles sometimes happen. Gabs, Edu and myself were driving up Mt. Palay-Palay one sunny Saturday. Edu was complaining that he hasn't seen the Philippine Falconet for quite sometime. I assured him that we will see these birds in this area. Just as I finished my sentence, I looked up and saw about three of them perched (where else?) on an electric wire. Gabs, who was driving, swerved to the shoulder to park, and suddenly yelled, "There's one beside the road!" He braked hard and almost threw Edu, who was sitting at the back seat, towards the windshield. Serendipity had it that I was at the front passenger seat closest to the unperturbed falconet. I clicked off a burst of shots while dodging Gabs who was beside me struggling to get a good look himself. Edu quickly recovered from his off-balanced situation and crawled over our camera bags (which were dumped next to him at the back seat) so that he too, could take advantage of this extraordinary opportunity.

Then the falconet flew away.

Deathly silence ensued as we all checked our cameras to find out if we were able to get good enough photos. A few minutes later sighs of relief filled the air as we all got confirmations that we indeed got a shot of the Philippine Falconet's crown.

As we returned home later that day, we were all flushed with success and we all wore a crown of pride on our heads. 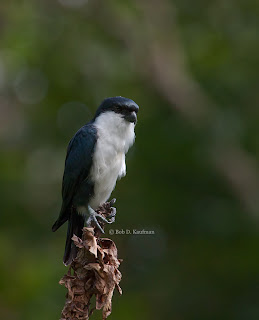 For other (less serendipituous?) birding blogs and photographs, please visit:

That falconette is stunning! Great photo too.

A most fortunate encounter indeed and a great photo. Sometimes we birders do just get lucky :-)

You are sooo lucky :D
But you deserve it :D
What a gorgeous Beauty & a wonderful shot!
Congrats!

Awesome shot of the Philippine Falonet Bob! You are one lucky dude! And what a gorgeous little bird. Look at those talons! What does the falconet eat?

@Larry, they eat dragonflies and other flying bugs which they catch on the wing.